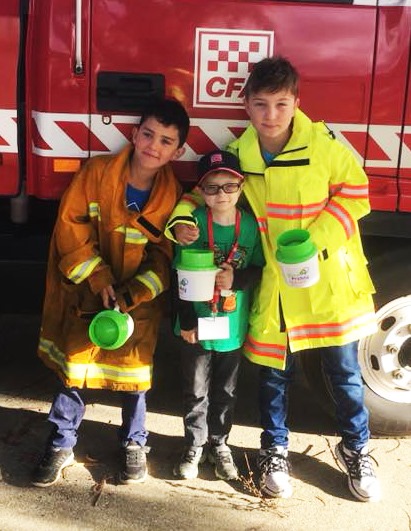 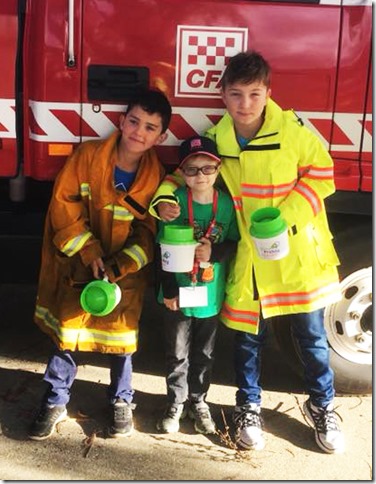 For the last three Royal Children’s Hospital Good Friday appeals, young Callum Judd has been watching progress from his hospital bed.
This year the brave seven-year-old joined his family to actually be involved in the collection with the volunteers from the Woodend CFA.
Callum suffers from neuroblastoma, which is the most common solid tumour of childhood. It is almost exclusively a childhood cancer occurring most commonly between the ages of 0-5 years.
Callum’s diagnosis is terminal, and he may only have a short time ahead. This year he was able to join his mother Claire, uncle Malcolm (who is 4th lieutenant with Woodend CFA), aunt Katie and cousins Aaron and Riley.
Officer in Charge at Woodend Mike Dornau said Callum was presented with a Woodend CFA cap and made an honorary member of the brigade.
“The amazing Callum jumped on the Woodend pumper and hopped on and off the truck with his mates, to collect a fantastic total of more than $610,” Mike said.
“The only problem was that he asked uncle Mal to sound the siren a little too often.
“The brilliant effort was cut short when the pumper was called to a smoke alarm activated at Woodend Aged Care.”
Mike said that by that stage, Callum was pretty exhausted and needed a break anyway.
“Callum, we were so honoured and inspired to have you share the day with us and wish you all the best in the time you have left,” Mike said.
“Mate, you are always welcome at the Woodend CFA, and we are sure the Good Friday Appeal will really appreciate your efforts in the collection this year.”

24/06/2022
Battlelines are again being drawn up over the future of Castlemaine's historic Froomes Road Bridge with the matter drawing some impassioned discussion during public question time at this week's Mount Alexander Shire Council meeting.