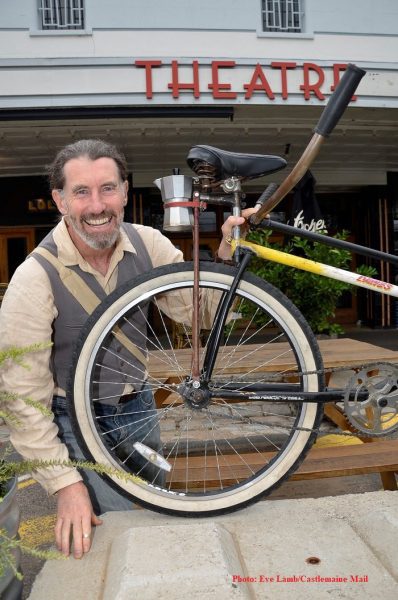 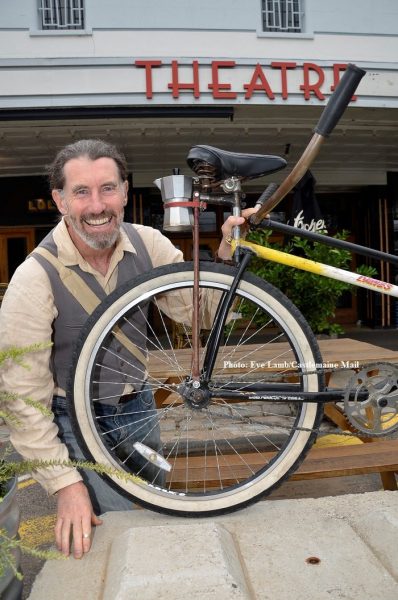 Hi Paddy. How long have you called Castlemaine home?
I’ve been here in town for 12 years, and in the area for about eighteen.
So not originally from here. Where are you from originally?
I grew up on a farm near Kyneton.
Not too far down the road.
Not too far. As a kid I just came here for the dentist. So my time here as an adult has been a lot more pleasant.
Why did you decide to make Castlemaine your home in more recent times?
I’m a part-time social worker and part-time circus-street performer and maker of strange eccentric bikes, so the artist community here was welcoming and coming up here for festivals was the big appeal for me. Living in town the appeal has been being able to ride or walk or run basically daily… and also being close to some great bushlands.
So what does your work in social work involve? Do you have a particular area of expertise within that space?
I work in community health. I’m a counsellor and I work with a large range of people from young people right through the age spectrum…I work a lot with men. There’s a lot of work men at times need to do, and some men are stepping up and some are ploughing themselves into work and different addictions as well. So I think that is a trend – more men realising the emotional upbringing they’ve had is fairly limited and they’re wanting to do more work on that side, especially as life throws up lots of challenges.
So pretty intense but rewarding work?
It is really rewarding. For me I have a balance in my week so I do three intensive days of counselling and the I do some days in the workshop working with bikes and steel and costumes.
Great. So you’re a bit of an exemplar in terms of getting some balance in life! Well Castlemaine is a very bicycle oriented community. It seems to have a disproportionate number of interesting bicycles and tricycles getting around its streets. Are any of those your creations?
I’ve moved on from doing a lot of dangerous circus performing tricks to more making and performing on the unusual bikes that I make. I like to think that I would be adding to the diversity of bicycles. Bikes don’t always have to look one type of way. They can be really functional but look really unusual. For me the kinetic play is a really big theme of mine.
How many bikes would you have?
I think I’ve probably got over 30 and probably made ten originals.
Can you give us a snapshot of some of the interesting bikes you’ve created?
Well I’ve made the Elliott, the (vertically stacked) tandem with an upstairs and a downstairs rider… I’ve made a shopper-chopper in which I’ve put a little dragster inside a shopping trolley, and it really makes the… Read the lot in today’s Castlemaine Mail…