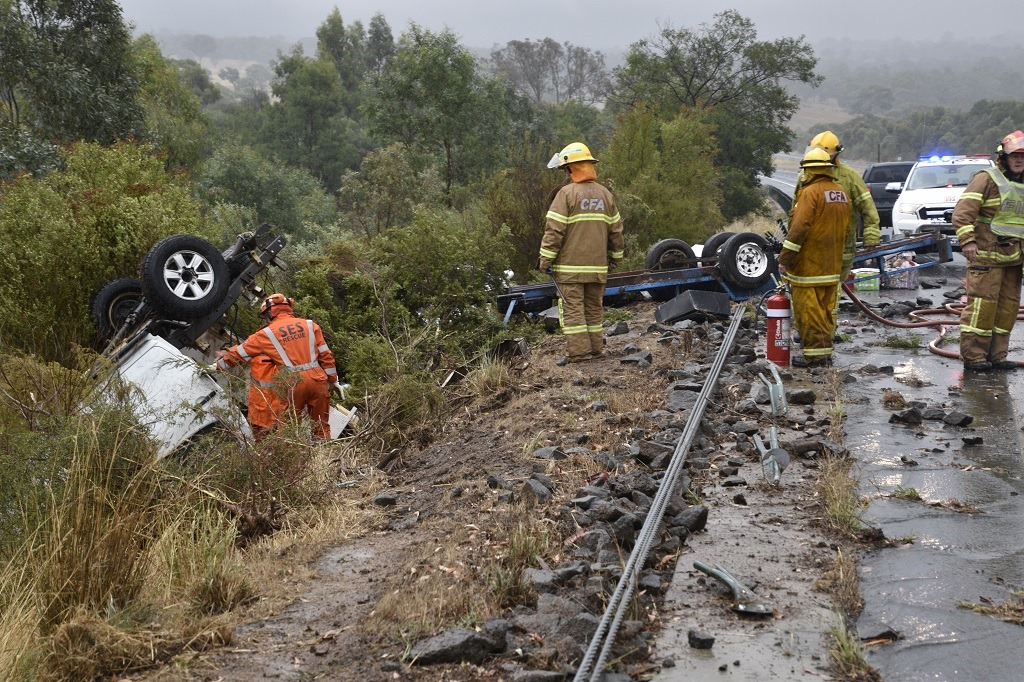 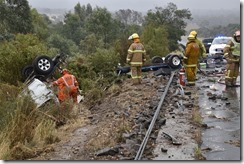 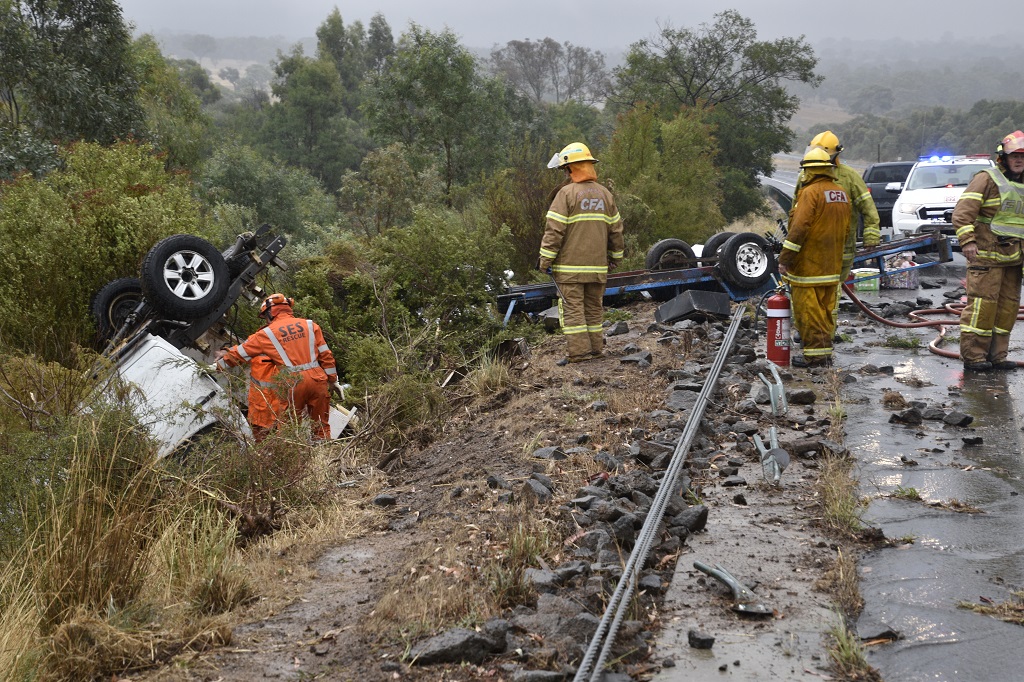 The placement of wire rope safety barriers along the Calder Freeway has once again been questioned following a spectacular crash at Taradale on Saturday afternoon.
A driver and passenger – two men from Bendigo – miraculously escaped injury when their twin-cab ute and trailer glanced the centre wire rope barriers before bouncing sideways across the traffic into the kerbside barrier, which they say acted like a trip and flipped the vehicle over the top and down a gully.
SES Castlemaine controller Paul Fitzpatrick said the driver lost control in wet conditions in a 110km/h zone at about 1pm on Saturday.
A local CFA captain on the scene also claimed the centre barriers had been installed too close to the roadway, stating specifications required them to be a minimum of four metres from the carriageway.
Elphinstone captain Andrew Chapman said the distance between barriers and carriageway was about two metres along this stretch of road.
“In days gone by when we had an accident like that one the Calder we had plenty of room to move traffic around the scene and keep it flowing, whereas Saturday we probably had a two-kilometre line of traffic held up because we simply haven’t got the room to move now that we’ve got those barriers in there,” Mr Chapman said. “VicRoads say that ideally cars would hit the barrier on an angle between five and 25 degrees and no more than 100 kilometres an hour, but the speed limit along there is 110km/h and you cannot have a car hit it between five and 25 degrees every time there’s an accident.
“I believe that it’s a only a matter of time before someone is injured or killed because of the way the barriers are currently installed.”
Mr Chapman said everyone he talked to agreed the barriers should have been installed in a single row along the centre of the median, rather than in two rows along either side.
“VicRoads’ shows data that the wire rope barriers save lives, and they probably do, but they’re also going to cost lives,” he said.
“The VicRoads data is that they prevent run-off-road crashes and head-on crashes but the fact is that in a decade there hasn’t been one head-on smash on the new Calder Freeway.”
VicRoads’ Safe System Road Infrastructure Program director Bryan Sherritt said the centreline flexible safety barriers were designed to prevent vehicles from crossing onto the wrong side of the road and hitting oncoming traffic, or roadside trees and other hazards.
“There’s no ‘one size fits all’ approach to the rollout of flexible safety barriers, and that’s why we are continuing to work with CFA Regional Command, who unequivocally support the roll out of flexible safety barriers, to make sure that any issues raisedby local brigades are addressed,” Mr Sherritt said.