Thieves who stole and torched Langley-Barfold Fire Brigade’s support vehicle last week may be linked to multiple break-ins that occurred in Kyneton.

The Ford Ranger was found burnt out in the Mosquito Creek area near Lake Eppalock early Wednesday morning; stolen from the brigade’s shed on Kyneton-Redesdale Road.

Brigade captain Ian Lonsdale said the vehicle was brigade-owned and purchased with funds generated through fundraising efforts and the incident was devastating news for members.

“This news hits pretty hard. It’s not what you want to hear,” he said.

“We are just lucky that this has occurred when the fire season is almost over.”

Mr Lonsdale said the brigade was left with no option but to upgrade security which would be an additional cost to the vehicle replacement (thought to be worth about $50,000 with gear fitted) and repairs to the roller door.

The brigade is still recovering from a break-in in early February when tools and equipment were stolen including chainsaws, a pole saw and batteries.

Detectives from the Macedon Ranges Crime Investigation Unit believe the same offenders could have been involved in break-ins at an eatery and real estate agent in High Street, Kyneton, around the same time.

In both cases the offenders made forced entry through the front doors and targeted cash registers and petty cash stored on site. The register busted open at the cafe was worth $1600 and was a vital clue in linking the cases with the stolen brigade vehicle.

Police made the connection after discovering part of the cash register discarded with several items from the brigade vehicle located near Kyneton-Redesdale Road.

A similar break-in was reported at Redesdale Hotel in the early hours of the same morning which Bendigo Crime Investigation Unit is now investigating.

On Tuesday evening, a silver 1981 Datsun 280c was reported stolen from a Macedon residence and was believed to have been captured on CCTV in the Kyneton area. Police say no connection has been made between the stolen Datsun and break-ins at this stage.

Anyone with information in relation to any of these incidents is asked to contact police. 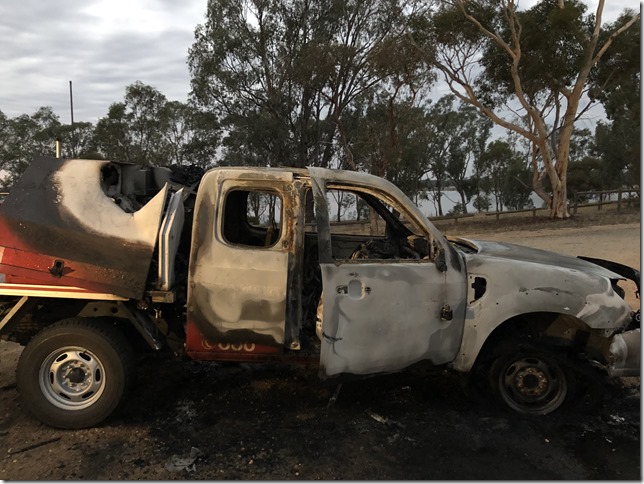 It takes a village – Housing Strategy to be launched

Women in music will warm away winter

Castlemaine Documentary Festival invites you to join ‘The Rumba Party’